My research is mostly focused on Public Policy Issues. I utilize different applied economics methods and economics theory to analyze the variations in the data. In particular, I use and develop econometric methods to analyze the urban planning problems, program evaluation, and changes in welfare by quantifying the willingness to pay for different policies.

The Impact of Urban Sprawl on the Temperature in the United States, During the past four Decades

Urban sprawl contributes to the heat island effect by eliminating vegetation, expanding dark surfaces, and increasing the daily travel distance. This study quantifies this effect by constructing and linking the required measures and exploiting variations in the data using different identification strategies to quantifies the causal relationship. I construct an index of residential compactness in U.S. metropolitan areas using satellite remote sensing and geographic information to analyze the landscape changes from 1974 to 2012 and link it to the Global Surface Summary of the Day (GSOD) data for the same period. To address the reverse causality issue ( the effect of temperature differences on the horizontal development), I utilize the planned interstate highways, emanating from the central cities as an instrument for the sub-urbanization in the United States. I also add another layer of identification by introducing a control group for each MSA in the sample. The results suggest a positive and causal relationship between the temperature of the MSA center and Urban sprawl. Thus, the horizontal development of the city imposes an extra burden on the temperature of the city center.

In this paper, we show how, when one has access to individual-level panel data, one can set-identify the answer to policy questions of interest (e.g., the value of a new product) using only the Generalized Axiom of Revealed Preference (GARP). Just as Varian (1982) showed how one can bound indifference curves non-parametrically, so can one bound the policy question.  These bounds can still be obtained with no parametric assumptions on the utility function (imposing only monotonicity and concavity) or the pattern of heterogeneity. The bounds can easily be obtained by "searching" for the maximum or minimum values for the policy question of interest, over a domain defined by the values which are consistent with GARP.

The Validity of The Benefit Transfer Methods (With Spencer Banzhaf)

Using two similar studies on the valuation of natural resources, this study utilizes novel non-parametric methods to test the validity of benefit transfer. The first is the valuation of reducing acidification in the Adirondack Park in New York (Banzhaf et al. (2006)); the second is a similar valuation of reducing acidification in the southern Appalachian Mountains (Banzhaf et al. (2016));. These similar studies provide an opportunity to test the validity of benefit transfer across different valuation methods, population, time, and ecological conditions within the framework of a consistent stated preference framework and policy question. The consistency of respondents' choices can be tested using a simple violation test of GARP. Then to examine the similarity of the preferences toward ecosystem services in two different sites, we will test for the differences in the consistency rate among combined choices of any two individuals at one site and two across sites.

The Effect of Tree Planting on Energy Use (Instrumental Variable Approach)

The High temperature in the urban area increases the demand for air conditioning, and as a result, enlarge energy consumption, One of the most simple ways to cool the cities is the planting of urban vegetation. For this reason and many other benefits of trees, many urban tree planting has been implemented in different cities in the United States by non-profit organizations and public agencies. One of the most successful programs is the Tree Shade Program by Sacramento Municipal Utility District(SMUD). This study causally estimates the impact of this program on energy consumption. SMUD provides trees only for eligible residents with a specific required lot(i.e., usable space in south and west of the building). I will exploit this regulation to have an exogenous source of variation between residents.

The Role of Labor Unions in Response to Pandemics: The case of COVID-19 [Paper]

Labor unions are among the largest institutions in the United States, and their role in regulating employee–employer relations is hard to ignore. Costly efforts to control the spread of COVID-19 (i.e., decreasing economic activity and increasing workplace safety measures), combined with the monopoly and collective voice faces of unions, emphasize the role unions can play in shaping the response of the workforce in coping with COVID-19. We analyze the effect of union size by utilizing state-level data in the United States and by employing a nonlinear probability model and general method of moments estimation. The results suggest new evidence of positive externalities for union employees compared with nonunion employees. We find that a 10% increase in unionization in the United States would lead to around 5% decrease in total cases of COVID-19 100 days after the onset of the virus, controlling for hours of work and differences in union members’ characteristics. 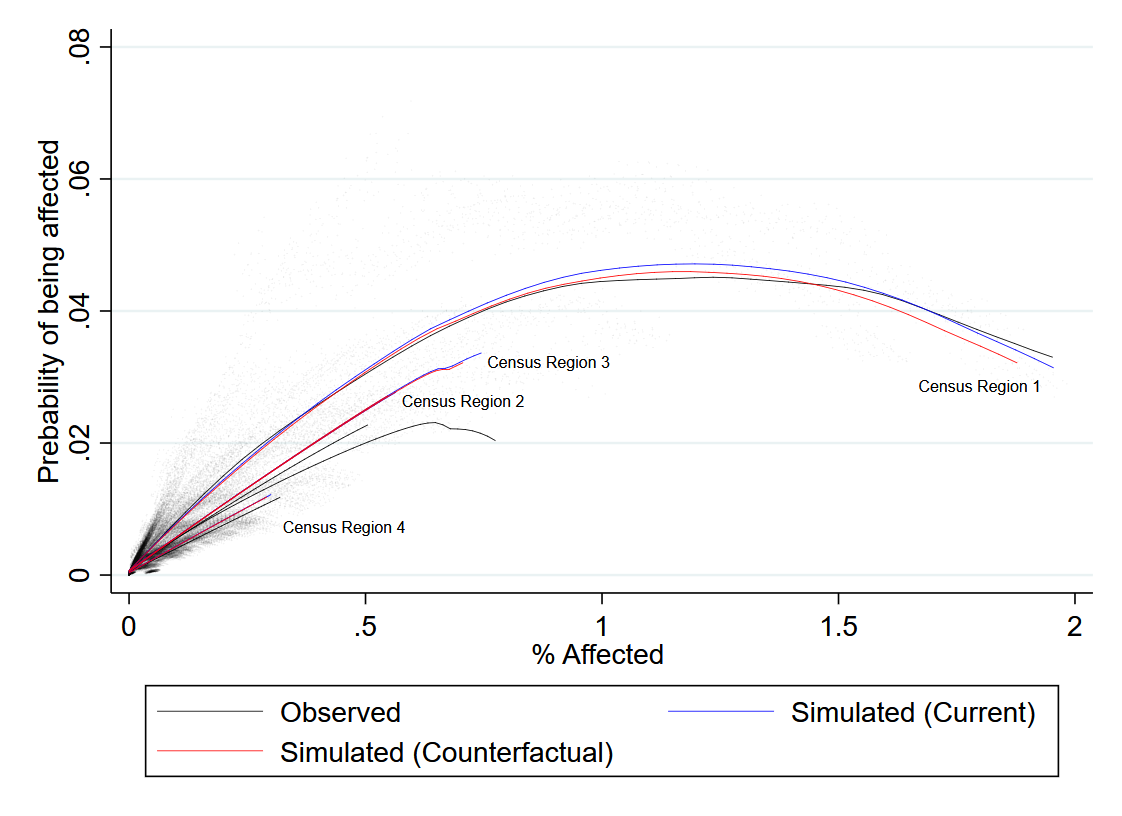 The Provision of Environmental Amenities: what can we learn about constituent preferences from legislative voters?

This study examines the impacts of demographic and economic characteristics of districts on house representatives’ voting decisions for a selection of critical environmental acts. Exploiting variety in career tracks of house members, we disentangle the effects of constituent interest from party affiliation and personal preference. Dividing house members into three different types; Reelection seekers, Higher-office seekers, and Retiring members; provide a framework to use legislative votes to study preference of constituent for a variety of environmental amenities.

The Impact of Welfare reform 1996 on marriage in needy families.

One of the goals of the welfare reform of 1996 was ending the dependence of needy parents upon government benefit by encouraging marriage. This study uses Difference in Difference method to examine the impact of welfare reform on quantity of marriage has been reported using survey of income and participation programming (SIPP) among dependent parents. The result shows significant and positive impacts of the welfare reform of low-income female residents with children of Georgia, Iowa, Louisiana, North Carolina, Washington, West Virginia, and Wyoming.